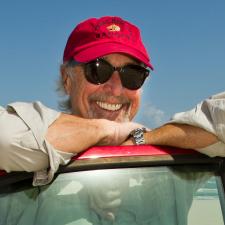 Tony Reisinger helps the shrimp industry improve production, save fuel, reduce bycatch and remain in compliance with regulations on turtle excluder devices, or TEDs. That list encompasses a variety of activities. Reisinger and Marine Fisheries Specialist Gary Graham recently worked on a project testing prototype bycatch reduction devices (BRDs) and are working under a grant from the National Fish and Wildlife Foundation to train shrimp boat captains and crews on proper TED installation and use. In 2014 alone, they reached almost 500 captains and crew members.

Reisinger has worked with fishermen his entire career. Previously a marine resource specialist with Georgia Sea Grant, he worked with TEDs in the early stages of their development there as an offshoot of efforts by trawlers to keep jellyfish out of nets. He continues to spend much time on docks and boats talking to people in the commercial fish and shrimp industry. “I learned early on that you have to go down to the vessels and spend time one-on-one with them,” he says.

He has long-standing relationships with many shrimpers along the coast through the Texas Shrimp Association and presents programs for the Brownsville-Port Isabel Shrimpers’ Association, often on TEDs and BRDs. The shrimp industry’s tremendous economic impact in Texas reaches well beyond the boats to people employed in processing, buying and marketing the product. Helping to reduce bycatch helps the industry, but also benefits fish species and sea turtles, he notes. When shrimp boats started using TEDs, sea turtle populations, especially Kemp’s ridleys, rebounded. Red snapper have also benefitted from bycatch reduction.

Reisinger has helped train 232 Texas Coastal Naturalists and works with these volunteers, who respond to events such as sea turtle and marine mammal strandings and oil spills. In response to increasing “red tide” harmful algal blooms, Reisinger created a volunteer group called the Red Tide Rangers to collect samples during a red tide event to help officials identify problem areas and determine when to issue health warnings to protect the public. The group also confirms algal bloom observations from NOAA satellites and ground-truths their forecasts.

Reisinger received the Texas Master Naturalist Chapter Advisor Award for 2013. He also was a member of a team of Texas Sea Grant agents and specialists who won the 2012 Superior Service Award in the team category from Texas A&M AgriLife Extension for helping Texas commercial shrimp fishermen qualify for Trade Adjustment Assistance from the U.S. Department of Agriculture.